Electronics manufacturing giant Foxconn has confirmed that its Tijuana-based Foxconn Baja California factory was hit by ransomware in late May.

“It is confirmed that one of our factories in Mexico experienced a ransomware cyberattack in late May. The company’s cybersecurity team has been carrying out the recovery plan accordingly,” Foxconn said, responding to a SecurityWeek inquiry.

Foxconn also said that it is currently in the process of restoring normal operations at the factory, but did not provide a specific timeframe for completing the process.

The electronics manufacturer also said that the impact of this attack on its overall operations is expected to be minimal.

“The disruption caused to business operations will be handled through production capacity adjustment. The cybersecurity attack is estimated to have little impact on the Group’s overall operations,” the company said.

Foxconn said it has been providing management, clients, and suppliers with “relevant information” about the attack, but did not share details on whether it has contacted the attackers or if it plans on paying a ransom.

The manufacturer did not say whether data was stolen during the attack, but a threat group that operates the LockBit 2.0 ransomware recently claimed the theft of data from the facility, threatening to make it public unless a ransom is paid. 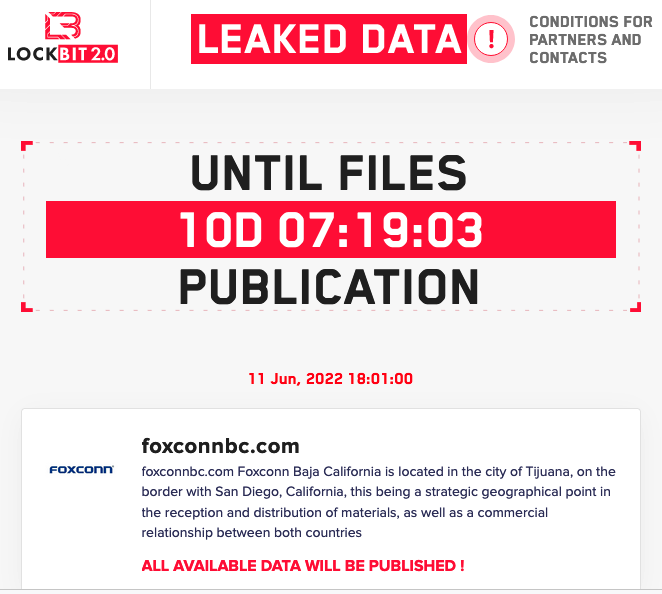 This is the second ransomware attack that Foxconn falls victim to. In December 2020, the DoppelPaymer (DopplePaymer) cybergang compromised an information system supporting the giant’s operations in the Americas.